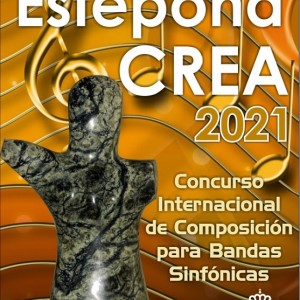 This event, which promotes culture and art among the youth of Estepona, will award the best composition in this seventh edition, to commemorate the 80th anniversary of the Municipal Band of Estepona. The deadline for receipt of works will remain open until December 31, 2020

The Estepona City Council has convened the seventh edition of the Estepona Crea contest, which this time will award the best "Composition for Symphonic Band", on the occasion of the commemoration of the 80th Anniversary of the foundation of the Municipal Band of Estepona (1940-2020 ). In this way, it is intended to promote and spread the musical culture by promoting band music, so deeply rooted in the culture of our people.

In this special call all musicians / composers of legal age, of any nationality, may participate in the contest, abstaining from members of the organization and first-degree relatives, as well as members of the Municipal Band of Estepona.

A unique and indivisible prize is established with an economic endowment of 10,000 euros. In addition to the cash prize, the authors of the three works selected as finalists will be awarded a trophy sculpted by local artist Juan Miguel Quiñones.

The Estepona Crea contest was launched in 2015 with the aim of promoting and incentivizing culture and art among the youth of the city. On a cyclical basis, different modalities have been established; the first year, Painting and Dance; in 2016 the modalities of Music and Literature were awarded; in 2017, Theater and Photography; in 2018, Audiovisual Creation and Sculpture, and in 2019, dance and voice.

The deadline for the reception of the works will remain open until 2:00 p.m. on December 31, 2020. The works must be sent by post, by courier service, or by personal delivery to the Culture Delegation, located at dependencies of the Padre Manuel Cultural Center, C / San Fernando No. 2, Estepona, CP 29680, (Málaga) Spain, indicating in the envelope the name of the contest "Estepona CREA 2021. International Composition Contest for Symphonic Band".

The jury will be made up of three people recognized in the world of composition and / or musical direction, who will select three finalists, who will be announced in March 2021, one month before the Awards Ceremony, scheduled in April, in the Felipe VI Auditorium. The three finalist works will be performed by the Municipal Band of Estepona, the jury's decision will be announced and the award will be presented to the author of the winning work.