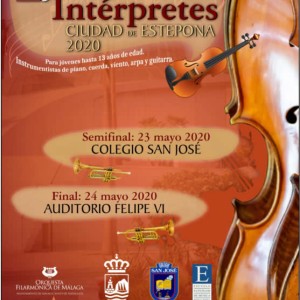 The Mayor of Estepona, José María García Urbano, and the professor of the Philharmonic Orchestra of Malaga (OFM), Olga Tarasova, today presented the second edition of the Young City of Estepona Contest, which will be held on 23 and 24 May and that will reward young talents who stand out as instrumentalists of piano, string, wind and guitar. The councilor has shown his satisfaction for the celebration of this new call, which gives continuity to a contest whose objective is to encourage and promote the talent of young artists.

The first mayor has also referred to the invaluable collaboration of prestigious entities such as the Reina Sofía Higher School of Music, the Albéniz Foundation and the Malaga Philharmonic Orchestra (OFM). "Thanks to this joint work we will ensure that this initiative continues to consolidate and become a benchmark in the field of musical interpretation, as well as a platform through which future great musicians are discovered," he said.

Likewise, García Urbano has highlighted the attractiveness of this contest and the stimulus that it implies for the participants, since among the prizes that are offered is the special of the Philharmonic Orchestra of Malaga, which will allow the winner to star in a concert in one of the cycles musicals organized by the OFM. The special prize awarded by the Reina Sofía Higher School of Music and the City Council will also be awarded, which consists of the participation in 'Summer Camp Music and Culture' to be held next July.

In addition, cash prizes of 1,000 euros will be awarded to the winner of the contest, 700 euros for the second, 500 euros for the third, and the fourth and fifth prize will get 200 euros each. There will also be a special prize of the public of 300 euros that will fall on one of the five finalists.

On the other hand, the professor of the Philharmonic Orchestra of Malaga (OFM), Olga Tarasova, has informed that the contest is open to children up to 13 years (those who have turned 14 on May 24, 2020 are excluded, last day of the contest) that will have to have Spanish nationality or reside in our country. Those interested will have until April 20, included, to send a link of their recording and the required documentation to the email cmestepona@gmail.com . For more information on the bases of the contest you can visit the website www.esteponamusical.es .

Tarasova has highlighted the very high level of the people who will form the jury, and who will be in charge, among all the works presented, choose the 10 semifinalists who will interpret their works on May 23 at 10 am at the San José school. Among them, the five finalists will be chosen to perform on May 24 at 11.00 in the Felipe VI Auditorium. The jury will be composed by the artistic director of the Superior School of Music Queen and the Albéniz Foundation, Juan Mendoza Velandia, the concertmaster of the National Orchestra of Spain, Miguel Colom, the concertmaster of the Philharmonic Orchestra of Malaga, Andrea Sestakova, the component of the Duo del Valle, Víctor del Valle, the professor at the Superior Conservatory of Madrid and the Reina Sofía Superior School of Music, Fernando Arias.

Finally, the mayor of Estepona has indicated that the city continues to program activities and competitions that encourage boys and girls interested in different artistic disciplines. "Culture is the best ally for young people, so we will continue working on initiatives that help spread the creation and talent," the mayor said.