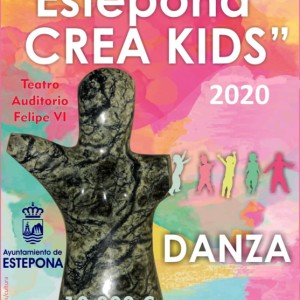 The City of Estepona extends until February 27 the deadline for submission in the sixth edition of the Estepona Crea contest, which this time will be aimed at children and young people between 4 and 16 years old, both inclusive.

In this special call the best children's artists will be rewarded in the dance modality, being able to participate individually or collectively. To do this, they must be registered in Estepona for at least six months before the opening of the call, in August 2019. In total, 10,000 euros will be distributed in prizes as follows:

The Estepona Crea contest was launched in 2015 with the aim of promoting and encouraging culture and art among the city's youth. On a cyclical basis, two modalities have been established every year; the first year, Painting and Dance, in 2016 the modalities of Music and Literature were rewarded; in 2017, Theater and Photography; in 2018, Audiovisual Creation and Sculpture and in 2019 in the dance and voice modality.

Registration can be done until February 27, at 2:00 p.m. , at the following address, indicating the name of the contest 'Estepona CREA Kids 2019' and the modality in which you will participate: Delegation of Culture, Cultural Center Father Manuel, Calle San Fernando, Nº 2, 29680 Estepona , Málaga, or by email at the address cultura@estepona.es

From March, the jury, formed by people of recognized prestige in the field, will select the finalists of each category, individual and collective, which will be announced one month before the Estepona Crea Kids Awards Gala. This gala will take place next Sunday, April 26, 2020 at the Felipe VI Auditorium.

In addition to the cash prizes, the winners will receive a trophy sculpted by the prestigious local artist Juan Miguel Quiñones.

The bases for this call can be found on the web page cultura.estepona.es.