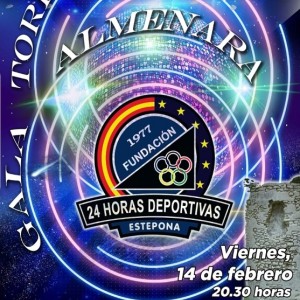 The mayor of Estepona, José María García Urbano, and the president of the '24 Sports Hours' Foundation, Manuel Vallejo Torrecilla, today presented the XXXII Gala of the 'Torre Almenara' Awards, which will be held in the town on Friday 14 of February, starting at 8:30 p.m., in the Felipe VI auditorium.

The mayor has highlighted the value for those selected to obtain one of these awards, which are proposed by the neighbors themselves, which implies that the city is the one that recognizes the work of these people and entities in the promotion of sport and cultural.

For his part, the president of the Foundation '24 Sports Hours', Manuel Vallejo, explained that the award ceremony for sport and culture will open with the interpretation by the Municipal Band of Music of a musical piece that It was announced last year and through which this entity wanted to combine the values of sport and culture.

Vallejo commented that about 60 proposals have been submitted this year. In addition, he has informed that the nominees in the different categories of this edition are the following:

Admission to the gala is free, although those interested in attending must book their invitations in advance at the Foundation '24 Sports Hours' at 952797663