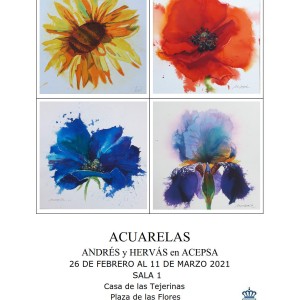 HOUSE OF THE TEJERINAS ESTEPONA

Estepona City Council informs that Room 1 of the Casa de Las Tejerinas, located in the Plaza de las Flores, will host from next Friday, February 26, at 4:30 p.m., the exhibition “Watercolors: Andrés and Hervás in ACEPSA ”, carried out by José Miguel Andrés Gutiérrez and Alfonso Hervás Cárdenas.

With this exhibition, which consists of 36 works, it is intended to show the activity developed jointly between both artists, between October 2019 and March 2020, with a group of people affected by schizophrenia, all of them belonging to the ACEPSA Association (Asociación of Caregivers and Affected by Schizophrenic Disorders and Associated Pathologies of Andalusia).

The practice of this project has consisted of an initiation workshop to painting through color, which has aimed at the therapeutic use of art to improve the living conditions of the affected people, socialization and the development of a work that give publicity to the association in order to consolidate the Association and be able to expand it to new users and facilities.

The workshop has been carried out in weekly sessions of two hours, and the first works carried out have allowed the Association to participate, in February 2020, in the annual Art Fair of the Gran Hotel Benahavís, although it had to be interrupted with the irruption of SARS-COV-19 and the death of Pedro Belinchón, founder and president of the Association.

Alfonso Hervás Cárdenas studied psychology in Granada and developed his professional work in the Penitentiary Psychiatric Hospital in Seville, later he studied Fine Arts at the faculties of Seville and Granada.

José Miguel Andrés Gutiérrez studied Technical Architecture in Seville, later he studied Fine Arts at the Faculty of Granada. He has been a teacher in the Department of Drawing, in different Andalusian secondary schools and Artistic Baccalaureate.